Teddies for Loving Care (TLC) raise funds for and organises the supply of cuddly toys to A&E units for children in severe distress and have so far distributed almost 2,500,000 TLC teddies! In fact a TLC Teddy is given to a distressed child every 2 ½ minutes on average.

The TLC Appeal originated after an allergic reaction suddenly caused the swelling and blocking of the windpipe of the wife of a Freemason. Her life was saved by the rapid action of the medical staff at an A&E unit, who were able to resuscitate and stabilise her. They are both eternally grateful for the swift and caring attention that she received, but found the experience the most frightening of their lives and speculated on the distress that children must face when visiting A&E units.

The idea of doing something useful for medical staff at A&E units was discussed with other local Freemasons, and from that point the compulsive idea of “Teddies for Loving Care” was born. The Appeal was launched in Essex in 2001 and has since been adopted by most of the Masonic provinces across the country. Prior to the launch, a great deal of research was carried out. Hospitals were asked how many teddies would be needed. We had to establish what style and size of teddy would be suitable in order to meet stringent toy safety regulations and be ‘cuddly’ enough to appeal to small children. We needed to find a distributor that could source and deliver the teddies for us at reasonable cost. By canvassing local Masonic lodges and explaining the concept, we gained confidence that support for the Appeal would be there.  Thankfully, after 16 years, that support and enthusiasm for the Appeal still exists and almost  2,500,000 teddies have now been distributed nationwide - currently one every  2 ½ minutes. Over 95%  of the money raised to fund the Appeal comes from Freemasons themselves through lodge donations, but we also receive some donations from grateful individuals and the sale of TLC merchandise e.g. other teddies (not the ones supplied to hospitals) and lapel pins.

Not every child visiting A&E will receive a bear. The medical staff use their discretion and will give a bear to a child that is suffering particularly from trauma, injury or illness. They use the bears to befriend the children, to reward them for being brave and in some cases to demonstrate what they are going to do.

One A&E Sister said “I cannot remember how we used to cope before the Teddies. I hope that you can continue to supply them for a long time”.

Another said “It’s not just a teddy, it’s so much more.”

As the TLC Appeal is a Masonic initiative, it’s pure nature has also benefited Freemasonry, by raising the level of public awareness of the contribution made to the community by Freemasonry, a greater understanding of the principles on which Freemasonry is founded, and how those principles are exercised in the modern world. 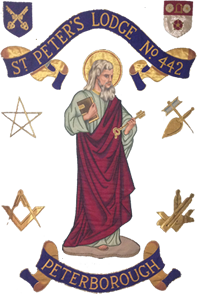 St Peter's lodge is a very warm and welcoming lodge with a steady cross section of all ages. Our formal meetings are on the second Thursday of the every month, with a rehearsal meeting on most Mondays.

We do enjoy a regular get together, whatever shape that may take, such as formal dinners, social meetings, Golf, Rugby or even a plain and simple night out etc.

If you would like to find out more and talk to someone about Freemasonry and what is involved please feel free to contact us.